Since I mentioned in the last post that I was intercepting and modifying some of the buttons on the Bluetooth gamepad to respond to two different types of input, I thought I'd share the Tasker code that I'm using to do that.

Actually, most of the work is done by the AutoInput plugin, which is one of the AutoApps series that extends and simplifies Tasker itself.

Just as I did for the Digital Dash, I'll be using the gamepad as the input source.  Just to recap, here are the functions it sends by default: 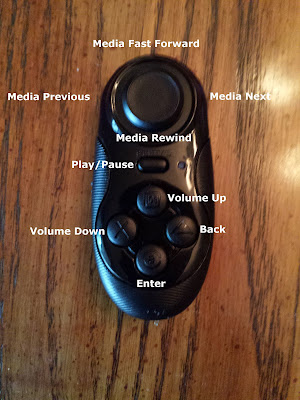 I'll just be capturing the "Media Fast Forward" button and giving it two functions: a normal click, and a long press.  Just for completeness though, I'm suppressing all the gamepad buttons.

The first thing to do is to run the AutoInput Key Suppress command:

This function traps the specified key inputs and prevents them from being delivered to the OS.  If you don't do that, you can still make the keys do whatever you want, but they'll also be passed along and perform their original function as well.  That might be useful for some situations, like having Tasker's "Say" function confirm what key was pressed while still letting it through, but I want to completely change the key functions, so I'm going to suppress them.

In my Digital Dash project, the Key Suppress command is part of the Startup task, but you can just run it manually if you want to experiment, since it's persistent and will stay in force until explicitly cancelled.

Now we need a couple of profiles and tasks.

This is the profile that determines what happens when the key is pressed and held.

The first thing it does is enable the second profile (which we'll get to in a minute).  It then waits for one second and then deactivates the second profile.  After that, it simply performs the function you want.  Here's it's a simple Flash Alert, but it can be any set of Tasker actions.

The second profile determines what happens when you click and release the key before the one second Wait expires:

Note that this profile is activated when the key is RELEASED and the task it launches is at a higher priority than the one for "FFLong".

Because this task is at a higher priority, it can interrupt the FFLong task and stop it during the Wait period.   Beyond that time, the FFShort profile will become inactive and won't fire at all.

If it does activate it simply shuts down the FFLong task and executes its own action, again, in this case, a simple Flash Alert.

That's all there is to it.

A couple of things to note, however.  Firstly, you have to name a profile before you can set its status.  So, "FFShort" needed a name.  "FFLong" doesn't (technically) but it's always a good idea to name your profiles.

Secondly, the actual status of "FFShort" doesn't matter after the key press has been handled.  If the "FFLong" task is the one that gets executed, the profile will be turned off.  However, if the "FFShort" task is called, the profile remains enabled.  But since it responds to a key up state and you can't have that without a corresponding key down event first, the profile can never trigger until "FFLong" is called first.

Of course, once you are done using the buttons, you need to stop capturing them.  This is done with the Key Suppress command again, but this time the configuration is set to disable:

Again, in this case, this is just a standalone task that you can run manually.  In my dash project that command is part of the Shutdown task.

Nice work Mike. Can you post your full project for this?

I've figured out how to intercept a button press and everything that you have here.

However, I don't want the task to be a flash output.

I would like it to take one button's input, intercept it, then output it as if a different button were pressed on the controller instead.

Any idea how to do this? I want the output to the system to appear as a button press, not a series of tasks or anything like that. Like If I press the "home" button on the controller, I want AutoInput to intercept that, suppress it, but then tell the Android system that I pressed the "Select" button on the same controller instead.

Thoughts? I have the catching and suppressing all set up, I just don't know how to output the replacement button press to the Android system.

Sorry, but I don' think I can be of any help anymore. I don't use Tasker much now, and have completely fallen out of the loop as far as new developments.

Hope you can get it working.

How to set AutoInput Key Suppress - Solution
Key suppress is an AutoInput plugin task.
- Create a separate task
- add AutoInput plugin action
- choose 'Mode'
- on key suppress, select enable
- select keys on 'Keys' or use 'Manual Key Codes' to record button presses.
(This is what I used for my Zero2 bluetooth remote)

Use the AutoInput plugin event 'Key' option to pair a button with a task.